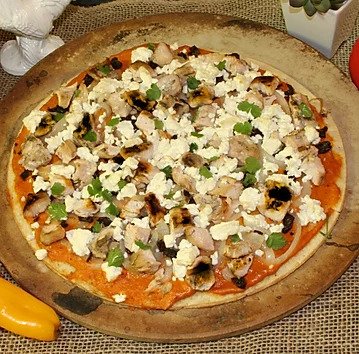 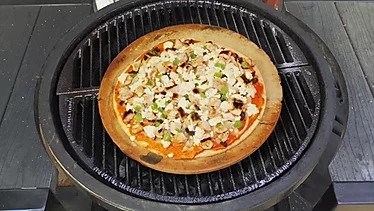 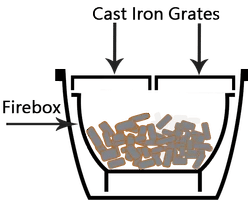 For our main dish today, we’re going to prepare a Blackened Chicken with a Zesty Red Pepper Pesto. Let’s start with the chicken.

​Set your Goldens’ Cast Iron Cooker up for direct cooking according to the diagram to the left.

We’re going to pre-cook our pizza toppings on the Goldens’ Cast Iron Cooker and infuse them with true wood-fired flavor. You can roast your red peppers along side of the chicken to save time.

The best way to cook chicken regardless of the cooking method is to brine it first. This process adds flavor and helps keep your chicken from drying out on the grill.

Pour all ingredients into a container and stir until salt and sugar have dissolved. Allow the brine to cool to room temperature. Add the chicken strips to the mixture, cover it with plastic wrap and store it in the refrigerator for 2 hours.

​Take the chicken out of the brine and pat it dry with a paper towel. Brush both sides of your chicken breast with olive oil and apply the blackened spice blend.

Dump all the ingredients in a bowl and mix well.

This Zesty Roasted Red Pepper Pesto, which complements a variety of dishes, is easy to make and it stores well in the refrigerator. With this said, it may be prepared in advance.

​Place your peppers on the grill and cook them until they become soft and their skin has charred. Carefully, remove your peppers from the cooker and immediately place them in a bowl with plastic wrap over it. Allow your peppers to cool for about 15 minutes. This steaming step helps with removing the skin. Once you’ve removed the skin, stem and seeds, add them to the blender. Add the remaining ingredients and blend until it reaches a coarse, dense consistency.

Take a pre-packaged pizza crust, brush it with a little olive oil on both sides and place on the grill. Allow the crust to bake on the cooker until you start to see it turn a light golden brown. Flip the crust over and brown the other side. Carefully remove the crust from your cooker.

Spoon your Zesty Roasted Red Pepper Pesto onto the crust like you would a traditional red pizza sauce and spread it out on the pizza crust. Top the pizza with your blackened chicken, caramelized onions, sun-dried tomatoes and feta cheese. Place it in the cooker. Since we already pre-cooked all our ingredients, your pizza will not take much time to warm through. Carefully, remove the pizza from your cooker and allow it to sit for 5 minutes before cutting and serving.