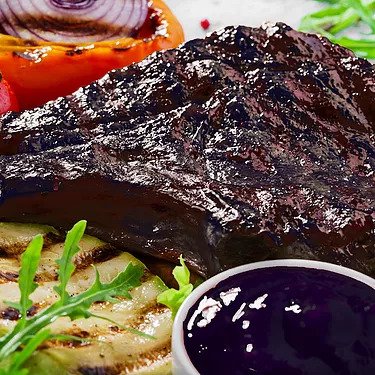 The months of June and July are peak season for blueberries and what better way to celebrate than a good old-fashioned barbecue. The sweet and tangy blueberry balsamic glaze perfectly complements pork.

Line a 13″ x 9″ baking dish with a single layer of pork chops. In a separate bowl, create a brine using 2 tsp. sugar, 1 teaspoon of salt and water. Whisk together until salt and sugar dissolves. Pour the brine mixture over the chops and let sit at room temperature for 15 minutes. Turn the chops over and allow them to sit for another 15 minutes in the brine solution. While the pork chops sit, let’s move on to the glaze.

​Puree the blueberries in a food processor or blender. Using a wooden spoon, force blueberry puree into a medium saucepan through a fine mesh sieve to remove skin and other solids. Discard solids and skins. Add vinegar, lemon juice and thyme to the blueberries in the saucepan and simmer for about 20 minutes stirring often until you have about 1/2 cup of liquid. Add unsalted butter, gently stir until melted and set aside.

​Now, back to the chops. Brush the pork chops with olive oil and season with salt & peppercorn blend. Grill the chops using direct heat for about 5 minutes on each side or until internal meat thermometer reads 145 degrees. Remove the chops from the cooker and allow them to rest approximately 10 minutes. Coat the chops generously with the blueberry balsamic glaze. Serve and enjoy.

This glaze is versatile and may be used in a variety of dishes. Try it on salmon, chicken and even vegetables like Brussels sprouts. It’s yummy, healthy and perfect when fresh blueberries are in season.