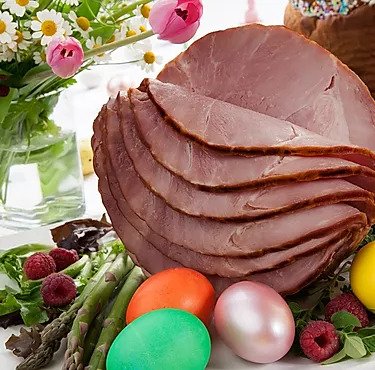 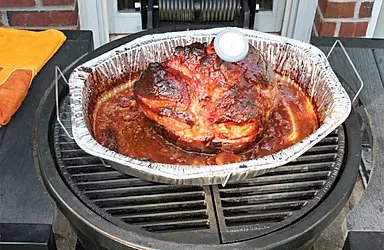 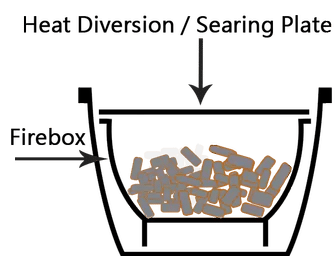 Surprise your family and friends with this twice-smoked ham recipe. Smoke your ham face down and honey glaze it with Goldens’ Cast Iron goodness! Green eggs and ham for Easter indeed!

Preheat your Goldens’ Cast Iron Cooker to 325 degrees. Adjust the bottom air intake vent and top cover to bring the temperature down to 250 degrees. Add your soaked apple wood chunks directly on your lump charcoal and loosely stir them in with the charcoal. Carefully place your searing plate on your cooker according to the diagram to the left. Place your ham face down on a rack and place in a large roasting pan. Pour the apple juice in the pan and add your apple slices (reserve a few slices for decoration). Place the broken cinnamon sticks around your ham. Carefully place your ham-filled roasting pan on the searing plate (lip up or down doesn’t make a difference) and allow it to cook for about four hours.

​While the ham is smoking, let’s start on our honey glaze. In a medium sauce pan, combine the Coke, honey, butter and brown sugar. Heat until the brown sugar dissolves. Allow the mixture to cool to room temperature. When the internal temperature of your ham reaches about 140 degrees, carefully spoon the glaze onto the ham’s surface.

​​​Baste the ham in pan drippings every half hour until ham’s internal temperature reaches 140 degrees. Carefully remove your ham from the cooker and baste it again with pan drippings. Let your ham rest for about 20 minutes. Then, slice the ham and serve it on a platter with thin apple slices and cinnamon sticks for decoration (optional).